Who is Nat Hill Wildlife Adventurer ?

Originally from New Zealand, I am a dairy farmer’s daughter who milked cows for pocket money, I then relocated to Australia in 2000 and spent 10 years working as a zookeeper at the Currumbin Wildlife Sanctuary on the Gold Coast.

Whilst at Currumbin I cared for a range of Australian fauna and delivered venomous snake and crocodile behaviour presentations.

I developed a keen interest in threatened species conservation and as the zoo’s senior herpetologist helped to pioneer Queensland’s first captive breeding facility for endangered frogs. I worked on breeding programs for the Eungella tinker frog (Taudactylus liemi) and the spotted tree frog (Litora spenceri) and released over 200 frogs back to the wild.

With a passion for conservation I gained field skills as a research assistant or volunteering for conservation organisations such as the Australian Wildlife Conservancy, Queensland Parks and Wildlife’s Threatened Species Unit and Amphibian Research Centre and internationally at the Madras Crocodile Bank & Centre for Herpetology and also with India’s Global Venom Initiative.

In 2011 I moved to the Northern Territory and worked as an aquarist at the Territory Wildlife Park and as a marine turtle guide for SeaDarwin. I also worked as a field assistant on various conservation projects including threatened species surveys in Arnhem Land and freshwater sawfish (Pristis pristis) and shark (Glyphis glyphis) research in the Adelaide River.

In 2014 I joined the Department of Parks and Wildlife Crocodile Management Team catching problem crocodiles and educating the community about crocodile safety. You may even see me on your TV screens from time to time. I have worked on National Geographic’s Monster Fish series, Australia’s Top 60 Dangerous Animals and Totally Wild.

I began working as a naturalist on the True North Adventure Cruises in  2017 and use my extensive knowledge of Australian flora & fauna to share my passion for conservation.

After years of working on threatened species programs and field work I have changed focus to community conservation efforts through my stories, experiences and sharing of knowledge.

Read my blogs and find out how you can help conservation of wildlife. 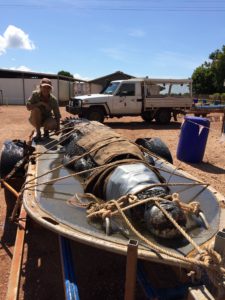 This crocodile was caught in the Daly River, Northern Territory, measuring 4.7 meters, with a bit of his tail missing.