Bush passionfruit, or passiflora foetida, is a relative of cultivated passionfruit and native to Central and South America. It was introduced into Australia around 1880 and has since become an invasive species, extremely common across the top end of Australia. It’s a creeping, scrambling vine, often found growing over and around other plants and trees, but can also be found as a ground cover. Bush Passionfruit produce fruit at various times of the year. The fruit are initially green, turning yellow when ripe. The fruit are encased in a unique net which makes the species easy to identify. This feature, along with the fact that they are so common, makes them a good bush tucker for amateurs like me to go out and try. The fruit contain black seeds and a sweet tangy pulp, both of which are edible. The taste is similar to cultivated passionfruit, maybe slightly milder. https://youtu.be/6MgxacqnXTc 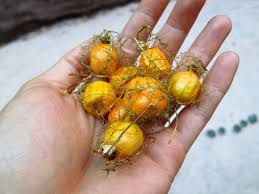