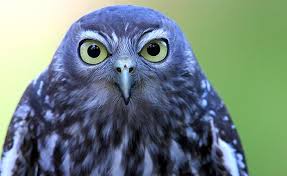 The most commonly heard call of the Barking Owl is a double note ‘woof-woof’ which sounds quite similar to a dog’s bark. They also make an unusual ‘yowing’ vocalisation which sounds a bit like a person shouting for help. This sound is sometimes referred to as the ‘screaming woman call’! In the early settlement of Australia a screaming noise matching the barking owl’s description was credited and told to the settlers by the Indigenous Australians as the Bunyip. The Bunyip was said to be a fearsome creature that inhabited swamps, rivers and billabongs. Bunyips had many different descriptions but most were of an animal of some sort whose favourite food was that of human women. The cries and noises coming from swamps and creeks at night were not said to be the victims but actually the noise the Bunyip made. It is believed by many that the sound is of the nocturnal Barking Owl and that proves the location, the noises and the rarity of the Bunyip cries. See my youtube clip. 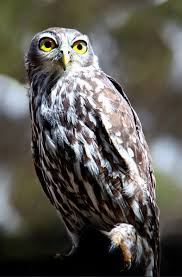